Most of the food we eat is turned into glucose, or sugar, for our bodies to use for energy. Diabetes is a disease in which the body is unable to properly use and store glucose. Glucose backs up in the bloodstream — causing one’s blood glucose to rise too high.

Taking insulin is often part of treating diabetes. Sterile, single-use HTL-STREFA PEN NEEDLES are intended to be used with a pen injector device for the subcutaneous injection of insulin. They are commonly used by people with diabetes who often require multiple daily insulin injections.

The proper injection technique helps diabetic patients to achieve the best possible health outcomes by ensuring that the correct dose of medication is delivered to the correct injection site, using the correct needle size. 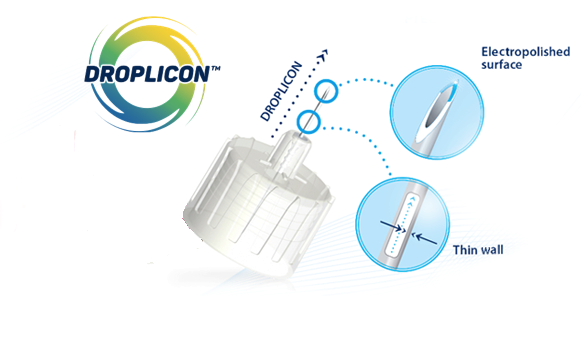 Droplet® pen needles are available in 10 versions, each marked with a different
color for easier identification

* Available on US and Canada markets only.

Remember!
Pen needles should be used only once and dispose!

Sterility is guaranteed if the needle seal is unbroken. The tip of the needle may be damaged with reuse.
This can increase the chance of experiencing pain when injecting as the needle tip is dulled; used needles also increase infection risk and cause possible needle clogging and inaccurate dosing.